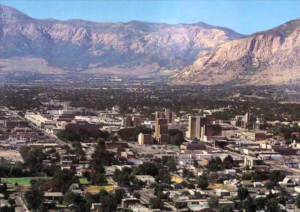 Ogden is near Box Elder County, which shares a name with one of Utah’s less obnoxious, but very common pests, The Box Elder Bug.

Ogden is north of Salt Lake City and east of the Great Salt Lake, and is the Weber county seat. The U.S. Census Bureau reported a local population of just over 84,000 people in 2014. Railway systems, both national and local have been long important to Ogden’s development and history. To this day, the city still operates with a good deal of rail traffic; it’s a major railway hub. Promontory point, the historic location where the Transcontinental Railroad was joined, is less than an hour (north, mostly) from Ogden.

Ogden is a sister city of Hof, Germany, since 1954. As a principal city within the Ogden-Clearfield area, Ogden provides a strategically convenient location for commercial and manufacturing activities. According to Forbes in 2010, the area is among the top 10 places to raise a family.

In 2013, Forbes also ranked Ogden city as the 16th in the nation for business and careers. Headquarters of several major corporations are located in Ogden, including Bank of Utah, America First Credit Union, Autoliv North America, and FJ Management Inc., (formerly known as Flying J, the truck stop and gas station chain).

When in Ogden, visitors and new moves can discover exciting opportunities for outdoor recreation. Nearby the city are the Wasatch Range foothills, which are great for trail running, hiking, mountain biking, and skiing is popular in winter. The quartzite cliffs along the Ogden foothills are a favorite of rock climbing enthusiasts.

Weber State University has an undergrad population of about 25,000, and is the largest higher education facility in the area. Located on the north end of town, Ogden Applied Technology College serves those seeking degrees and certificates in several trades and professions. Less than an hour to the north is the University of Utah in Logan, where noted Mormon and economic historian Leonard J. Arrington, was in residence until he passed away in 1999 (Arrington was known as the “Father of Mormon History”).

The Front Runner line of Utah Transit Authority ends in Pleasant View, a small community just north of Ogden proper. The station is nearby the Weber County Fairgrounds.

Snowbasin, Wolf Mountain, and Powder Mountain offer some of the best downhill experiences in the state and are quite popular. Kayaking and watersports are also available at the well-developed park situated on the Weber River.

The city is home to the DaVinci Academy of Science and the Arts, the Ott Planetarium, Peery’s Egyptian Theatre, and the Treehouse Children’s Museum.

Situated along the Wasatch front, Ogden has many pests common to Utah, including the Box Elder Bug (named after the Utah County of the same name), June bugs, and common ants. Wasps, fleas, mosquitoes, and bed bugs are all common challenges. Let us put you at ease and take care of those pests, so you can relax. We serve customers almost anywhere in Utah, and we are actually headquartered in Clearfield. Call Beeline today.