Each season brings out a different aspect of nature’s unrivaled beauty. As summer comes to its annual close, fall signals the onset of cooler weather with brilliant displays of color. When viewed from afar, box elder bugs could be considered one of our area’s exquisite seasonal sights. Gathered in droves with their stark black and red bodies mingling together in a graceful mass, they resemble some sort of exotic flowering plant. 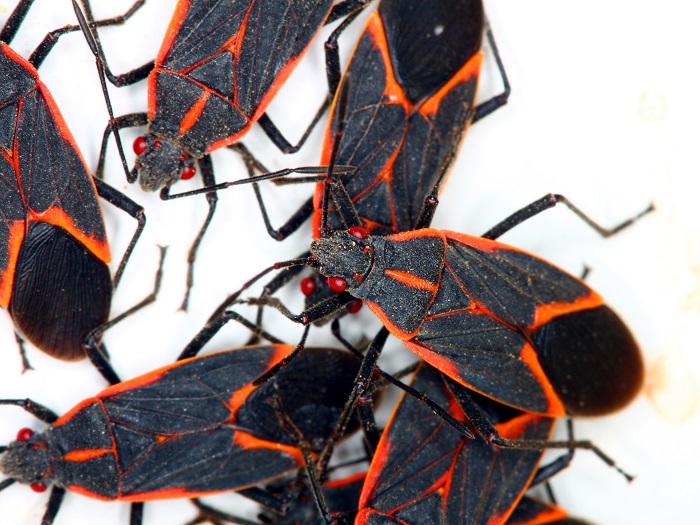 Of course, when that mass is blanketing the side of your house and working its way inside, bit by bit, around your windows and doors, it loses a great deal of its wonder. If you’ve been in the area for a while, you’re probably accustomed to seeing the collective relocation rituals of box elder bugs in Salt Lake City, Utah. We don’t usually pay much attention to them during summer when they’re most active, but once temperatures start dropping, they huddle together and soak in the sun on our homes or the heat inside them as the case may be.

Frustrating but Not to be Feared

First and foremost, if your home is being overrun by box elder bugs in Salt Lake City, Utah, there’s no immediate cause for concern. Unlike fleas, ticks, and bed bugs, they don’t feed on the blood of people or pets. As opposed to rats, mice, roaches and other undesirables, they won’t bring diseases and additional pests into your home. While some intruders like to feed on the insects attracted to your property this time of the year, elder bugs’ natural defense systems make them a less-than-enticing snack for spiders and certain other forces.

Although elder bugs move much like locusts, they won’t swarm in and devour all your trees, flowers and autumn crops in one fell swoop. With some larger infestations, they have been known to eventually suck all the life out of the trees and other surrounding plant life they choose to call home. They’re not looking to raid your pantry or silently eat your home right out from under you. While any number of reports insist they don’t bite, those of us who’ve felt their sharp little pinpricks might argue that point. That being said, they don’t have venom, break the skin or cause adverse side-effects.

Going back to their ingrained safeguard against predators, it’s not exactly a pleasant scenario. When these insects feel threatened or happen to be smashed by a shoe or rolled-up newspaper, they give off a noxious odor. Whether as a result of being squashed or simply going about their daily routines, they also tend to leave stains in their wakes. Aside from both those facts, having them congregating in the upper corners of your bedroom while you’re trying to sleep or accidentally dropping in on a meal can be a bit unnerving.

What Can I Do about Them?

If you’ve got a budding problem with box elder bugs in Salt Lake City, Utah, you can take a few measures on your own to keep them somewhat under control. They’re not strong swimmers, so simply hosing down your deck, siding and shrubbery on a regular basis once they start appearing in droves may be enough to keep them at bay until professional help arrives. Make sure weather stripping around your doors and windows is intact and in good shape. Sealing up noticeable cracks and placing screens over vents in your attic or crawlspace will also go a long way toward keeping them outside where they belong. Still, they have a way of finding other crevices.

Some reports suggest getting rid of any female box elder trees on your property, but committing mass arborcide isn’t necessarily the answer. They’ll still be attracted to other plants as well as the heat radiating from your home. Standard off-the-shelf bug sprays aren’t usually effective on these particular invaders, either. If they do kill off some of the ones causing you grief, more are likely to follow.

Appearance: The box elder is a small, oval-shaped bug with wings. They are identifiable by the red stripes along their bodies.

Habitat: During the warmer spring and summer months, box elders will infest maple, box elder, and ash trees. During the winter months they will nest in homes and offices and hibernate unless the rooms are heated.

Food: Plant life, such as flowers and leaves are a box elder bugs staple food source. These pesty critters also destroy the trees that they live in by drinking the nutrients the tree provide.

Reproduction: Box elder bug will lay their rust colored eggs in their host tree or on the leaves of the tree. They hatch in a couple of days and develop completely in a few, short months.

Signs of infestation: Plant life will begin to die and dissipate and the trees in your yard will slowly fade. When box elders enter your home you will notice them next to the warm structures within your home. Their droppings are also noticeable and will leave stains on furniture and clothing.

When they find their way inside, you can gently collect them on newspapers or dust pans and send them back to the great outdoors. If you decide to sweep or vacuum up the larger crowds, be sure to have plenty of air freshener and stain remover on hand just in case. Keep in mind, you’ll need to repeat these processes over and over again until professional intervention arrives.

We’re Here for You

At Beeline Pest Control, we offer a number of safe and effective treatments for box elder bugs in Salt Lake City, Utah. Whether you’re looking for reactive or proactive solutions, we can help. You don’t have to cut down your trees and shrubs and level your gardens or gradually lose them all to these invaders, and there’s no need to permanently enshroud your home in plastic.

As the leading exterminator in Salt Lake City, we also began providing service throughout the rest of Utah. We provide services in Salt Lake City, Ogden, Orem, Sandy, Provo, South Jordan and other areas in Utah. To find out more about our services, visit our ‘Get a Free Quote’ page and fill out the form or call us at 801-204-9134.